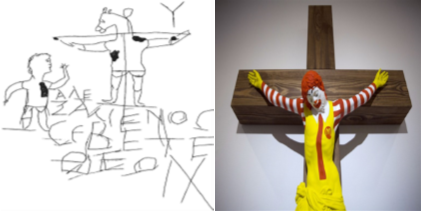 Above you see two examples of hatred, ignorance and intolerance. The one on the right is of our age. It is titled McJesus and is part of an exhibit in Israel that has outraged many Christians in the Holy Land. It depicts Jesus as the clown, Ronald McDonald. The one on the left is from about the year 200 A.D. and is known as the Alexamenos Graffito. It shows a Roman Christian and Jesus on the cross as a donkey. The caption translates as Alexamenos worships his god. While I do not think either of these examples would be considered great art, they do speak to us of currents of the age in which they were created. The older of the two, dating from around 200 was the age of violent and state sanctioned persecution of Christians in society. Christians were taunted, ridiculed, imprisoned, denied their rights and killed. Today, around the world, Christians are taunted, ridiculed, imprisoned, denied their rights and killed.

The late archbishop of Chicago, Cardinal Francis George said, “ I expect to die in my bed, my successor will die in jail and his successor will die a martyr in the public square.” The cardinal said that this was a hypothetical answer to the dangers that secularism will bring for Christian believers. There is continued evidence that being a faithful Christian believer is a dangerous position to be in. Throughout the world, especially in Africa and in the Middle East, Christians are being murdered and the populations decimated. Here, in the United States, this past week a Federal Judge in California ruled against the religious exemptions made by the current administration to the Affordable Care Act (Obamacare). A few weeks ago two senators on the Judiciary Committee chastised a nominee to the federal bench as unqualified not because of his legal views or judicial record but because he was a member of the Knights of Columbus! Closer to home I have had two different parishioners come to me concerned about comments that their employers/supervisors expressed regarding their wishing their co-workers “Merry Christmas”. China, in the last few months, has started a new wave of persecution against Christians and Christmas saw Iran crack down on the Christian minority there. The list of where Christians are being persecuted is a long one and the number of examples is growing each day. Now, of course, forcing The Little Sisters of the Poor to provide contraceptive coverage in their health plan for their employees or denying Catholic organizations from participating in adoption services or attempting to force Catholic hospitals to perform abortions is not the same as imprisonment, torture and death, but it is rooted in the same ignorance and intolerance and yes, for many, hatred of Christians and our beliefs.

Imagine if you will, the outrage if some other religious figure was lampooned – a rabbi, an imam or perhaps, as in days past, a person of a racial or ethnic minority, being ridiculed or, in today’s culture, someone making fun of someone because of their sexual orientation. Can you see the marches and demonstrations? Can you hear the outrage in the broadcast media? The response of the media when the issue of Christian persecution is brought up is denial and more ridicule. They say, as does the Washington Post, that there really isn’t a persecution and Christians are making the whole thing up and are too sensitive.

We have been here before. But don’t despair. Be faithful and be holy. Cardinal George, in that now famous statement, concluded by saying, “Following the martyred bishop, his successor will pick up the shards of a ruined society and slowly help rebuild civilization, as the Church has done so often in human history.”