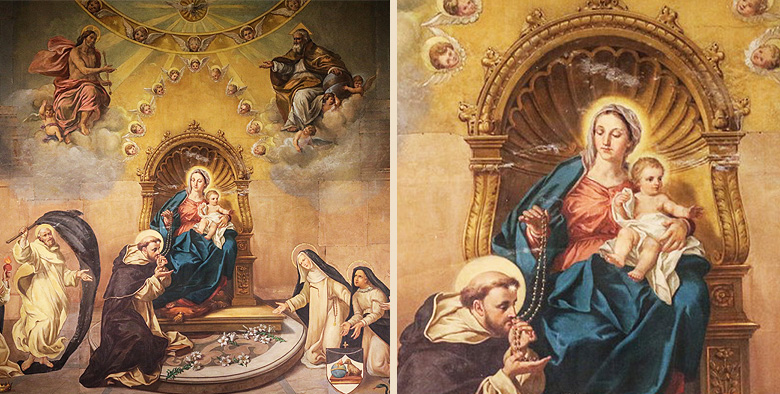 October, Month of the Rosary

The month of October each year is dedicated to the Rosary. The Feast of Our Lady of the Rosary was introduced by Pope St. Pius V (1504-1572) in the year 1571 to commemorate the miraculous victory of the Christian forces in the Battle of Lepanto on October 7, 1571. The Pope attributed more to the “arms” of the Rosary than to the power of cannons and the valor of the soldiers who fought there.

It all started in 1571 when the Catholic League entered into battle against the Ottoman Empire to protect Italy from invasion. The Turks were on a warpath to overthrow all of Europe, killing millions of people and forcing Islamic conversion on survivors. They had conquered the Middle East and Mediterranean islands of Cyrus and Crete; Italy was next.

As the impending battle loomed, Pope Pius V called on various religious communities throughout Europe to join him in praying the Rosary, including public recitations, to defeat the Islamic threat. Heading into battle, every man in the Catholic League’s forces carried a Rosary. Their fleet was no match for the competition; they were vastly outnumbered.

Miraculously, the Catholic League returned victorious after a daylong battle known as the Battle of Lepanto that took place off the coast of Greece. In thanksgiving for Mary’s intercession and protection, Pope Pius V declared the day — October 7 — as a feast day for Our Lady of the Rosary. To celebrate, a Rosary procession was held in Saint Peter’s Square.

After the feast day was established, the entire month of October was dedicated to the Rosary in 1884 by Pope Leo XIII in his encyclical Superiore Anno:

“Last year, as each of you is aware, we decreed by an Encyclical Letter that, to win the help of Heaven for the Church in her trials, the great Mother of God should be honored by the means of the most holy Rosary during the whole of the month of October. In this we followed both our own impulse and the example of our predecessors, who in times of difficulty were wont to have recourse with increased fervor to the Blessed Virgin, and to seek her aid with special prayers.”

Although the commitment to the Rosary was formalized in 1571, it was an established prayer long before then. The Rosary was first given to Saint Dominic by the Virgin Mary during an apparition in 1214 in Prouilhe of southern France. She presented it as a source of strength to aid him in the conflicts with Albigensian heretics. The image of Our Lady of the Rosary reflects this apparition, with Mary holding the child Jesus in one hand and the other hand extending to give the Rosary beads to Saint Dominic. Pope Benedict explained the meaning behind the image in a 2007 Angelus homily:

“This important iconography shows that the Rosary is a means given by the Virgin to contemplate Jesus and, in meditating on his life, to love him and follow him ever more faithfully. It is this message that Our Lady has also bequeathed to us in her various apparitions.”

Saint Dominic went on to establish the Order of Preachers, known as the Dominicans. This spurred the Dominican Order to make the Apostolate of the Rosary their special concern. The Dominican Pope, St. Pius V, did much to further the spread of the Rosary and it thereafter became one of the most popular devotions in Christendom. It was the same Pope St. Pius V, who in 1569 officially approved the Rosary in its present form with the Papal Bull, Consueverunt Romani Pontifices. It had been completed by the addition of the second half of the “Hail Mary” and the “Glory be to the Father” at the conclusion of each mystery.

It was in the Middle Ages that the Rosary came to be used in various monasteries as a substitute for praying the Divine Office for the lay monks and devout lay persons who did not know how to read. Instead of the 150 Psalms, they would pray 150 “Our Fathers” counting them on a ring of beads known as the crown or “corona.” With the growth of popularity of Marian devotion in the twelfth century, the “Psalter of the Blessed Virgin Mary” developed now substituting 150 “Hail Mary’s” in place of the “Our Father’s.”

The 150 “Hail Mary’s” were subsequently subdivided into fifteen decades by the young Dominican friar, Henry Kalkar (1328-1408), with each decade referring to an event in the life of Jesus and Mary. The Dominican, Alanus de Rupe (1428-1478), further divided the episodes in the history of salvation into the Joyful, Sorrowful and Glorious mysteries.

Saint John Paul II expanded on the Rosary’s power in his 2002 apostolic letter Rosarium Virginis Mariae, when he announced the Year of the Rosary and the addition of the Luminous Mysteries:

“With the Rosary, the Christian people sits at the school of Mary and are led to contemplate the beauty on the face of Christ and to experience the depths of his love. Through the Rosary the faithful receive abundant grace, as though from the very hands of the Mother of the Redeemer.”

John Paul II called the Rosary his favorite prayer, in which we meditate with Mary upon the mysteries which she as a mother meditated in her heart (Lk. 2:19) (Osservatore Romano, 44; 30 Oct. 1979).

Many other Popes have contributed to the increased devotion to the Rosary by their writings. Pope Paul VI ( papacy: 1963-1978) devoted the last section of his Apostolic Exhortation Marialis Cultus to the Angelus prayer and the Rosary (MC 40-55). In this document, he wrote that “the Rosary retains an unaltered value and intact freshness.” (MC, 41)

The Rosary is primarily a scriptural prayer. This was summarized by Pope Pius XII (papacy: 1939- 1958) who said that the Rosary is ” a compendium of the entire Gospel” (AAS 38 [1946] p. 419). The Rosary draws its mysteries from the New Testament and is centered on the great events of the Incarnation and Redemption.

In this month of October, let us consider the beautiful prayer of the Rosary as a means that we too can use to draw closer to God by meditating on the great mysteries of our salvation.