Without a doubt it is always useful to look behind the text to gain fuller insight into the messages contained in and conveyed through Sacred Scripture. In Sunday’s Gospel proclamation (Matthew 16:13-20) we will hear Peter publicly profess his faith to Jesus saying “You are the Christ, the Son of the living God.” The site of this Confession is significant.

Caesarea Philippi is located in the northern most part of Israel, situated some 30 miles north of the Sea of Galilee on the southwestern base of Mt. Hermon. There is a great spring that feeds the Jordan River as it begins its journey south from the surrounding heights. In the first century, the Jewish historian, Josephus, in The Wars of the Jews, (Book 1, Chapter 21.3) described the topo-graphy: “[Here] is a top of a mountain that is raised to an immense height, and at its side, beneath, or at its bottom, a dark cave opens itself; within which there is a horrible precipice, that descends abruptly to a vast depth; it contains a mighty quantity of water.”

Caesar Augustus gave this district to Herod the Great, who annexed the territory to his kingdom. Herod, being a shrewd politician, erected a temple in the city in the emperor’s honor, making the city one of three cities which Herod dedicated to Caesar (the other two being Sebaste in Samaria and Caesarea Maritima along the Mediterranean coast). Josephus noted, “And when Caesar had further bestowed upon [Herod the Great] another additional country, he built there also a temple of white marble.” After Herod the Great’s death, his son Philip ruled the area and gave the city the name Caesarea Philippi.

The worship of the Roman emperors began with Caesar Augustus’ adoptive father Julius Caesar, who saw himself descended from the goddess Venus.  After his death, the Roman senate conferred upon Julius the status of a god of the Roman state.  Augustus dedicated a temple to him. Augustus also benefited from his father’s title.  It followed that if his father was “god,” then Augustus himself was a “son of god.”  Soon temples were built not only to honor the “god” Julius, but also the “son of god”, Augustus. 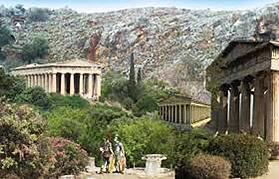 This practice was repeated as temples honoring various   emperors were built across the empire over the centuries.  Herod the Great’s temple to honor Caesar Augustus in  Caesarea Philippi was part of the backdrop behind Jesus’ question to the disciples.

Worshipping a pagan king as a god was nothing new. Cultures reaching as far back as the Egyptians and Mesopotamians believed in the divinity of their leaders.  Many times God’s people were tested, as pagan rulers required them to choose between fidelity to the one true God of Israel or the pagan state, gods, and cultural practices.

The pagans of Jesus’ day commonly believed that their fertility gods lived in the underworld during the winter and returned to earth each spring.  They saw water as a symbol of the underworld and thought that their gods traveled to and from that world through caves.

When Jesus brought his disciples to the area, they must have been shocked.  Standing near the   pagan temples of Caesarea Philippi, Jesus asked his disciples “Who do you say that I am?”  Peter boldly replied, “You are the Son of the living God.” The disciples were probably stirred by the        contrast between Jesus, the true and living God, and the false hopes of the pagans who trusted in “dead” gods.

Jesus continued, “You are Peter, and upon this rock I will build my church, and the gates of the netherworld shall not prevail against it” (see Matt. 16:13-20).  Standing as they were at a literal “Gate of the Netherworld,” the disciples must have been overwhelmed by Jesus’ challenge.